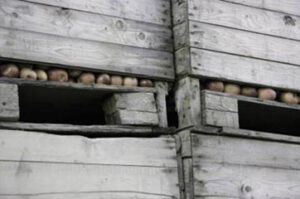 In 1912, Charles E. Petch of Toronto arrived at Covey Hill, a graduate of the Ontario Agricultural College at Guelph, in the employ of the Federal Government.

As an entomologist, he was the first scientist sent into this area to aid in the expanding apple industry. As well as working with insects, he was also expected to deal with most facets of apple growing.

In 1914, he moved the laboratory to Hemmingford and it remained there until 1952, whereupon his duties were taken over by the Federal Agricultural Research Station at St-Jean-sur-Richelieu.

He gradually got infected with the apple-growing bug. In November 1919, he bought a farm just west of Hemmingford in partnership with W.P. Fisher and this remained in effect until 1946.

In 1920, they planted most of their orchard. In 1927, W.P. Fisher was hit by a car while riding his bicycle and was on crutches for the rest of his life. Hence, other than acting as bookkeeper, his activities in the orchard were over.

When planting the orchard, the ‘Fameuse’ variety was king. However, the largest percentage of trees planted was ‘McIntosh’. This proved to be a wise move because during the cold winter of 1933-34, the majority of ‘Fameuse’ were killed, whereas the ‘McIntosh’ survived. 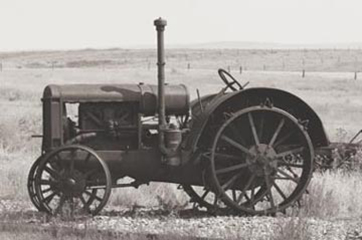 C.E. Petch carried out so many experiments that the orchard became known as the ‘Experimental Farm’ and many locals thought it belonged to the Canadian Government. There were no buildings on the farm so, in the 1920’s an old building was purchased from George Edwards of Covey Hill. I believe a Mr. Wolfe, who had participated in the Patriot Rebellion in the 1830’s on the Patriot side, built this barn in the 1840’s. It was dismantled, transported and re-erected on the farm. It is still being used today.

The main varieties were: Duchess, Dudley, Red St-Lawrence, Wealthy, McIntosh and Fameuse. Less important were Red Astrachan, Melba, Hume, Scott Winter and Tolman Sweet. There were also many varieties that had no names and during the war years, 1939-45, when there was a shortage of fruit and everything sold, the names applied to these unnamed varieties changed from year to year, depending on the names of the girls we had working for us. I remember one white apple that resembled the Yellow Transparent having it’s name changed from Cora to Lillian to Zella to Madeline. This happened to other varieties as well.

Being a gravelly loam soil with hillocks, drainage was necessary. This was done by horses with scoops. Laying a clay tile drain was a major task and many were laid and are still functioning. Stone walls disappeared at this time as they were used to cover the drains which helped to allow the water to get to the tiles. Horses pulled the sprayer until 1942 when they were retired and replaced by a Ford tractor, at which time I began working in the orchard full time, in the summers. The horses were looked after by Frederic Glaude, one being owned by him and the other by the Fisher and Petch orchard. Up until this time, all the work requiring horses was done by Mr. Glaude. This included spraying, rock removal and bringing in the apples on a wagon that held 31 bushels. It had been built for 32 but the horseman needed a seat. Much of the hay cutting was done by scythe. In 1936, a Royal Bean #35 was purchased. The big debate at purchase time was whether to have iron wheels or rubber tired wheels. The iron won, much to the chagrin of the men that sprayed. With an iron frame and another on the back of the sprayer, many a bruise was received around the thighbones. The iron wheels didn’t give a bit.

In 1946, W.P. Fisher passed on and the orchard then became the Petch Orchard, owned by C.E. Petch.

Charles Marshall and Robert Francis, sons of C.E. Petch, were attending Macdonal College. Charles had returned to Macdonald in the fall of 1945, after a three-year stint in the army, where he obtained the rank of First Lieutenant in the Artillery. When peace was declared he was at school, working on his Captaincy status.

Charles and Robert went into partnership and bought two farms, the former George J. Brown farm at the south end of the village, and the Pincott farm on route 52 (now route 202), about a mile east of the village.

We planted about 4 acres in 1946 and in 1948; we planted most of the Brown farm. Also in 1946, the packing-house was built and we finally got into it about the middle of October, after a six inch snowfall during the first week of the month. It was cold packing in the drafty old barn. The Pincott farm was gradually planted and we finished this in 1982.

Packing was done on the farm until 1931, when the Hemmingford Apple Growers’ Cooperative, formed in 1928, built a cold storage with packing facilities. This burned down in 1941. We went back to packing on the farm until we helped build the Franklin Apple Growers Cooperative in 1952, in Franklin Centre. This folded and we were forced to enter the Cooperative at Farnham. Finally, we opted out of that in 1975 when I stopped teaching high school and came back to the orchard full time. We started our first ‘Pick your Own’ that year and also started selling fruit from a kiosk at the roadside.

Many fine people have worked for us during the eighty odd years we have been in business. I would like to mention them all but can’t. However, I must mention Bob Swales, who worked for us from the 30’s to the 50’s. He was a mentor to me in many ways. Working for the boss’s son wasn’t easy but he did well. I mustn’t forget to mention Donald Dan, who started as a kid in school and worked for many years. Then, there was Ralph McClelland, a fine gentleman, who worked for us for many years after retiring from his own farm.

In 1992, the Petch Brothers evolved into The Petch Agricultural Enterprises Inc. It has gradually evolved so that Tim Petch, son of Robert, is president; Richard Ellerton, son-in-law of Robert, is vice-president. With the death of Charles Marshall in 2000, Robert Petch is secretary-treasurer.

The winter of 1992-93 was the coldest on record, with a month when temperature remained below zero Fahrenheit. We lost 60 acres of orchard to the cold, which included the most recently planted block of 25 acres of the Pincott farm.

In 1998, we in Hemmingford were in the epicenter of the famous ‘Ice Storm’. We lost approximately 35% of the bearing surface of our orchards. In 2002, Mother Nature threw another new curve at us, when she blew in hot air in March and the temperature remained at 90 degrees Fahrenheit for a week. The sap flowed and then the temperature dropped. We had the poorest, smallest crop since 1945 when we were completely frozen out as well.

With the opening of the kiosk by the side of the road in 1975, Carol, my wife, became involved in the operation. She is the daughter of a well-known local orchardist, Douglas Laurie. Since then, our daughter Mary and our daughter-in-law Pamela, have joined in selling and providing various types of apple products at the orchard kiosk. It is truly a family enterprise.

In 1975, the packing-house was turned into a cold storage. In 1984, we dispensed with the small kiosk and built a new sales area alongside the packing-house. We also built our garage and storage shed. We started to press juice in the 80’s and gradually have expanded this facet of our operation.

With changing from huge trees to dwarf apple trees, we are buying machinery, which is adapted to smaller trees.

In 1999, I built my museum and I am attempting to save artifacts and items of interest pertaining to apple growing.

Petch Agricultural Entreprises Inc. hope to be in business for many years to come.

(This text was written by Robert F. Petch a short while before his death in 2005 at the age of 79. Tim’s children are growing up and now we have the fourth generation of the Petch family active in our orchards.)